Ever wonder what becomes of a blue marlin after all of the photographs, interviews, and fanfare of a fishing tournament? How exactly do you dispose of a 900 pound fish?

In order to answer that, I took a camera along to document the process! After all the crowds disperse, the fish is loaded onto a flatbed truck, and moved to a suitable location on the water for biological sampling. Unfortunately this takes a lot of brute force, and there was no time for photographs.

After the fish is removed from the truck, which is by no means an easy feat, sampling can begin. 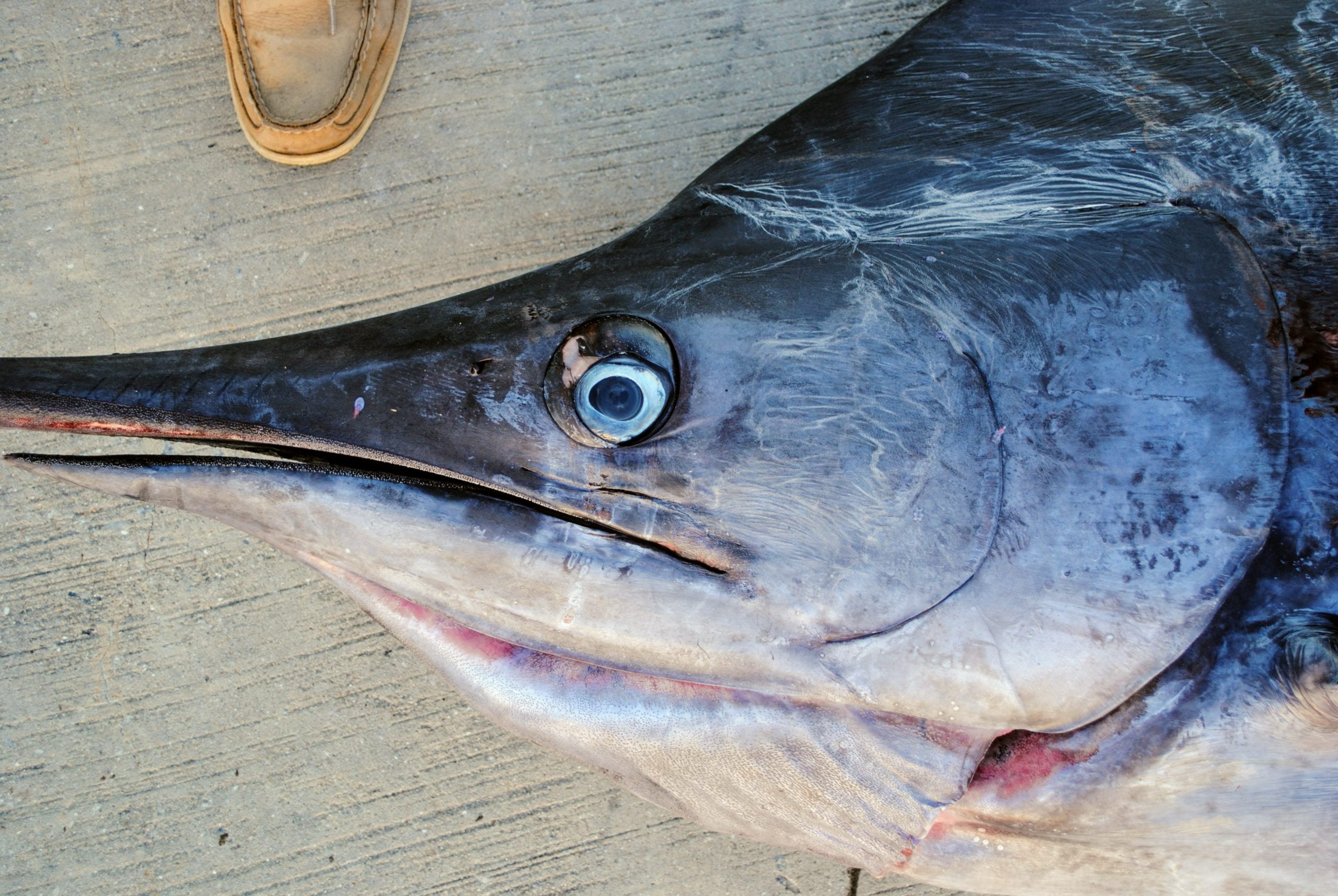 The goal of this whole project was to harvest tissue samples for various laboratories. These include liver samples, stomach contents, age structures, and muscle samples. Different labs will use these tissues to determine things such as diet, age, and mercury content. In order to access these tissues, the fish must be cut up! Although that may seem obvious, there is a right and a wrong way to achieve this. Cut up incorrectly, you risk damaging the tissues to be sampled,  or, you risk floating 900 pounds of stinking fish into some poor fools backyard who happens to live down current.

Here you can see some organs, including the bubbly swim bladder, which we will discuss later on.

I have no photos of the actual samples being taken, as I couldn’t sample and photograph at the same time. Essentially, they are cut out, and unceremoniously placed into plastic bags, which are then placed into a cooler to be frozen afterwards. The samples will be sent to the various labs after they are frozen for a day.

At this point, the sampling is finished.

Now we move on to disposal! The fish must be chopped into smaller pieces so that the local sharks and other fishes can finish the job for us. We had to ensure that the swim bladder was completely popped to prevent any of the pieces floating away, and as I said earlier, ending up in someones back yard. This apparently was not always the procedure, however, after a few complaints and phone calls, is now on the books.

After this, there is a lot of hosing blood over the side of the dock, and throwing of 15 pound hunks of meat into the sound. The bill and head were collected the next day by the angler so that he could get a mount created. A fair question that I hear from people regarding this process has to do with why we throw away so much meat. On the surface, that is a great question, and although there are some people who love to smoke marlin, they are generally regarded as not safe to eat. This does depend on locality and species, and I have heard that Hawaiian anglers often eat their billfishes. In the eastern US however, the mercury content is deemed too high for safe consumption. In fact, as of writing this, the EPA recommends less than one serving per month for men and 0 servings for both women and children. Then why kill it at all? That is another discussion for another day.

US EPA Page on Methylmercury bioaccumulation